Two guys and a truck – the beginning 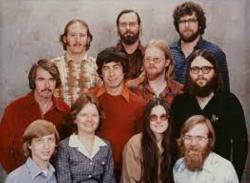 I know of a company which is now owned by the third generation. In both their marketing for customers and in recruiting they sell themselves as a third generation family business. Tucked into a corner of the Presidents’ office is a cherished family picture. It is of two brothers, probably in their late twenties or early thirties. Behind them is a truck. The picture memorializes the very beginning of the company. Now the company has hundreds of employees and trucks and is very successful. It is clear the brothers worked hard and had to overcome a lot of obstacles.

What is your story?

I asked the President if I could borrow the picture for a few minutes. I walked around the office and shop and asked the employees if they knew what the picture was. No one did. When I told them it was of the two founders with the first truck, mouths fell open. People crowded around. Lots of the employees had stories about meeting the two brothers later in life. That is how they knew the two brothers, as two older, successful business people. Now they saw the two brothers in a completely new way. They could now RELATE and ENGAGE.

Too many times your employees focus on the company as it is. It is hard for them to relate. The picture of the brothers made it clear, they were not yet successful and probably heavily in debt. But they had a truck and a dream. They were clearly excited and looking forward to the challenges ahead. The photo at the top is the first eleven employees of Microsoft. Bill Gates is at the bottom left, Paul Allen is at the bottom right. Can you imagine any of them being hired by Microsoft now? It is hard to relate and engage with a couple of billionaires who happen to be two of the richest people on the planet.

There is little difference with a smaller company. Once the employees saw the picture they had a new perspective of the company. The resulting conversations cemented the new perspective and created a view of what it really means to have a third generation business. At the time of the picture, did the brothers imagine what their company would eventually look like? Would they be proud of the result? What would they change? What did they lose or gain when they went from one truck to hundreds?

Do your employees know your story?