The results of bitter division 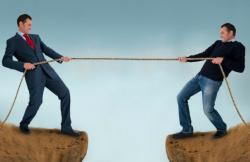 Note: People Profits does not hold any political positions

The last two Presidential elections have proven just how deeply divided our country is. I have seen the same level of division in organizations. The symptoms and the final results are not pretty. One organization was split along service lines. They acted internally like two competing organizations. Employees would literally see anyone assisting the other side as a traitor. Each side had a division leader who fostered the split.

Another organization had a Vice President who created splits on their own staff. The VP also created splits between their department and other departments. Many of the affected employees did not even realize what was going on. They presumed what they were being told was true and acted on it. Later they realized what was going on. In the meantime, the division was creating lots of bitterness and employee turnover.

Division is always created by people

The division in an organization will always end with stifled results. There is a lack of agreement on where we are going and how we are going to get there. The undercutting may be overt or, more probably, covert. People in the organization will not even know what is creating the problem. They can feel and see it; but, not know where it is coming from or why. There will be lots of finger pointing and almost always will be started by the very person creating the problem.

The solution has to come from the top

The biggest problem with the above statement is when the CEO is the creator of division. The next problem, which I see on a regular basis, is when the CEO knows who the agitator is. However, they are not willing to do anything about it. There are too many excuses to list here. Over a period of time, the employees may figure out what is going on. If they see nothing being done, the employee turnover will spike accordingly.

As long as nothing is being done, the employer reputation will suffer greatly. This will create difficult recruiting, turnover and engagement problems. Somewhere out there, is a point of no return. No matter what is done, the issues will not get better. There have been numerous times, I have walked into an organization which is at that point. It is a difficult conversation when you have to tell a business owner or CEO – it is too late.