Politics and how it can affect your employee turnover 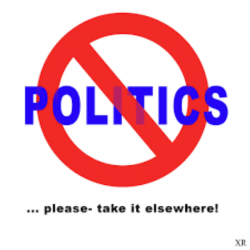 Note: People Profits does not have any political positions

Over the next couple of weeks we are going to see a lot of political theater regarding an opening on the US Supreme Court. The political part of the process is normal and will always be there. There will be little discussion about whether the nominee has the skills and character to perform the job. Just to be a nominee would normally satisfy that question. However, the real fight will be over who agrees or disagrees with the future legal opinions of the nominee.

Too often hiring decisions are influenced by issues beyond skills, education and experience. There is a need to determine whether a candidate is a cultural and values fit. However, I have seen hiring managers who go past these issues. The hiring managers have not been trained where to draw the lines. Both organizational and non-organizational political issues can interfere with making the right choice.

Many organizations have decided to institute a “no politics” environment

In this case, the hiring manager should be careful to not bring up a political discussion even in the small talk before and after the interview. It is simply not relevant. A candidate might bring up a political issue during the interview process. The hiring manager must inform the candidate of the policy. I have even seen candidates make it clear during an interview - they would not be able to abide by the policy. It should be obvious, what needs to happen.

The bigger issue is almost always the organizational politics

Hiring managers are always looking for people who will not just do the job. They also want people to support them in any organizational politics. The last thing the hiring manager wants is for their employee to support someone else.

I was in a situation one time as a Vice President when an employee came to me with a problem with their Vice President. I quickly learned the problem was wide spread and numerous employees had the same issue. As you can imagine the potential politics could quickly go off the chart. How do I help and protect the employees at the same time? How do I try to minimize the politics and not create a problem between the other VP and myself? So much of it was reliant on the attitude of the other VP and our CEO. They had to desire to minimize the politics as much as I did.

The rest of the story is for another day.