Management does not listen to us 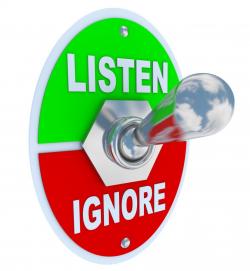 The above statement routinely comes up in organizations. Management has announced another change without listening to the employees first. The change is based in what management thought the production floor needed. Many times there is a total disconnect between management and the floor. This disconnect will be communicated loud and clear in response to the announced change. It is the floor who will always take the brunt of implementation. If the employees see the change as irrelevant or counterproductive they will sabotage the change. Often, the results which management is trying to obtain would have been attained with input from the floor. The change and its’ implementation can be saved by communication during the implementation. Only by listening and then modifying the change.

A habit of not listening will create employee turnover

A lack of listening can take many forms

Each year the organization would use the engagement survey to make and document changes. Employees at all levels were involved in the project. It became clear from the outset that the main issue expressed by the employees was not going to be addressed. It would be simply ignored. The unofficial communication network among the employees made it clear nothing was going to be done. The communication meetings with the employees were a sight to behold. When it became clear the rumors were true, the employees body language was unmistakable. Employee disengagement was happening in real time. Employee turnover was not far behind.

Though we all struggle with listening, can we afford the cost?