Does Tom Brady even think about the money? 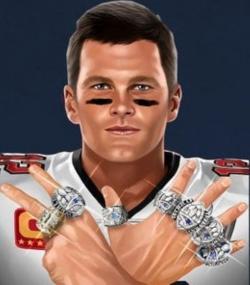 Tom Brady is now in a class by himself with the most number of wins in the Super Bowl. The fact he was in his first year with a new team is even more incredible. There are people who believe his current record will never be broken. Does he have another win in him? We will see. For years now, I am sure the money is of little importance to him. Clearly, that is not what is motivating him. He is now chasing his own record and attempting to be seen as the GOAT – Greatest Of All Time.

Is money a motivating factor for each of your employees?

Some people are not motivated by money to begin with. The vast majority of people get to a certain level of income where they are happy. Once they achieve their persona level, they are no longer pursuing or motivated by money. Any attempt to motivate them with money will fail. It is very important to know what the primary motivating factor is for each of your employees. It is generally not difficult to do this. A simple conversation will do.

Money is no longer my primary motivator. My desire is to show employee turnover can be cured and maintained at a much lower rate. Presently, manufacturers see waste as something to be managed and consistently reduced. I would like to see organizations view employee turnover like manufacturers now see waste. For a period of time, I chose to make less money as I built the platform to demonstrate how this is done.

The value of knowing the primary motivator cannot be overstated

I worked for a company one time where one of the prime motivators in the sales department was to be seen as a “Hunter”. These were the sales people who brought in new accounts, especially large accounts. We sold to a very wide range of customers and the size of the accounts reflected this range. The majority of sales people were personally driven to attain the hunter distinction. This distinction was easily objectively qualified. There was no ambiguity. Yes, there was also more money for a new account. But, in talking to the employees, it was obvious the money was a secondary consideration.

Not only did they want to bring in new accounts; but they wanted to bring in certain accounts. Obtaining these accounts were seen like a quarterback winning seven Super Bowls.