The synergy of employee disengagement and turnover 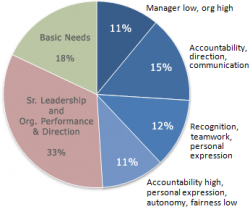 What makes this even worse is in my experience most of these numbers are even worse than stated above. I know of few companies who know what is driving their employee disengagement and turnover. It is the last number in the list which drives the numbers above it. If you do not determine your root causes, you will continue to spend tons of money and effort with the same results.

I was being interviewed for a Corporate VP of Human Resources job. As always, I was being interviewed due to my success in fixing turnover. If I accepted their offer, I would have inherited the issues of both disengagement and turnover. The vast majority of the employees were not engaged. The employees were in a class where the demand for their skills was much higher than the supply. They were routinely leaving and being rehired. They were being rehired simply because they needed them. The majority of the employees had been rehired at least once. You can imagine the lack of engagement of the rehired employees.

Where is your organization going?

It did not take long for me to figure out the biggest problem of this organization. They were going nowhere. They had certain contracts which they always had. They had not expanded in years and had no plans to. The organization was openly communicating this to the employees in different ways. Most of the employees were using this organization to pad their resumes. As soon as they met the requirements of a more desirable employer, they were gone.  The organization had few selling points and lots of drawbacks from an employee standpoint.

The changes necessary to fix the problems would be contrary to current management plans.

Do you think I took the job?