Saying no and other difficult things 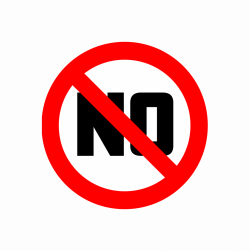 Recently I was working on identifying recruiting sources for a client. I ended up at two sources which were almost identical. The physical locations were very similar. They were physically close. A few minutes from each other actually. The people who were at the locations were demographically identical. The goals of the people were also very similar. My visits were at the same time of day.

However, there were many clues underlying a significant difference in values

The first mistake is when the above clues are overlooked. The second mistake is when people decide to move forward with both of the sources even when they see the clues. They decide that two is always better than one. They tell themselves they will hold the second group to a higher standard when hiring. They never do. They always have lots of reasons to undercut the standard. They need warm bodies. They have a contract they have to fulfill. They promise themselves they will reinstate the standard once the contract is completed.

At one point, I caught a vision of two employees from each recruiting source sitting next to each other waiting for their interviews. The two higher value candidates would not be impressed with the two lower value candidates. Would they walk out? Maybe. Would they question why they are there? Absolutely. Do you want either of these scenarios to happen? NO!!

So what happened next? I continued to look for good recruiting sources which fit my client. It took a couple of weeks, but we found another quality recruiting source. It was clear the values were in alignment with the first source. I was so glad we had the inner strength to say no.

Need help in holding the standard?