The unseen conflict with your employees 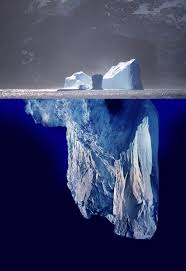 In the traditional model of choosing between people and profits, structural conflict is created. No matter which way you choose you are inherently destabilizing the other part of the equation. If you choose to look outside the box you can decide to make both people and profits equally important. This decision creates both stability between the two elements and allows for an infinite amount of synergy.

When you choose one or the other the inherent destabilization creates structural conflict between the organization and the employees. Much like an iceberg, most of the conflict is below the surface. This unseen conflict generally comes to the surface at the time of evaluations, pay raises, benefits enrollment to name just a few. Most of the discussion will also be below the surface. It will not be between employees and managers; but, between employee and employee.

Most internal communication does not include management

This conflict is a major source of rumors, low morale and employee turnover. By eliminating or reducing this conflict, you will also reduce the negative employee discussions. Note that all of these are symptoms not root causes. Low morale is always a symptom. Overly negative rumors and employee talk are also symptoms.

I worked for a company which had all of the above negative conflict and communication. The root causes of the issues were that none of the employees felt the organization had their best interests at heart. This organization felt they were putting employees ahead of profits; but the employees did not see it. Management began to proactively implement programs which clearly showed they understood their employees’ values and goals.

This led to a marked decrease in the unseen conflict and all the other symptoms. Both parties were getting what they wanted. This increased revenues, profits and employee compensation; however, the cost per dollar of revenues and profits actually declined. The employees now felt they were aligned with the business goals and were being rewarded accordingly.

Would you like to have a better understanding of your unseen conflict and how it can be solved?